Hope you are relaxing from any post Thanksgiving craziness or Black Friday shopping. I’ve got a fun, easy read for you today. It’s another local restaurant review!

Since moving to Little Rock, I’ve been hesitant to trying Asian cuisine. I had my go-to places in Iowa and I’ve just been nervous that these new places wouldn’t live up to the hype I have from Davenport favorites. I’m a big fan of the usual Chinese and Japanese restaurants, but I really love Thai and Vietnamese. And ever since moving here, I’ve really missed pho.

My friends came in clutch this past weekend. After a Friday night hang, we all decided to go to lunch together the next day and Mike’s Cafe was suggested. As soon as I looked up the menu I knew this place was legit. The menu is filled with pages of amazing foods from some of my favorite apps like spring rolls and bahn mi to entrees of soups, vermicelli, fried rices, chow mein, their specialties and so much more. It’s honestly a little overwhelming!

I was laying in bed that night browsing the menu and already picking out things I wanted to order. Majority of us had not been there so we knew we wanted to order a bunch of things to share and pass around!

I woke up the next morning starving and super excited for it to be lunchtime already. We met up with our friends to carpool together and hit the road heading just south of UoALR. On an average day if I was just driving past Mike’s I probably wouldn’t think twice about it. But if you know good food, every place worth visiting is typically a hole in the wall.

Mike’s was the epitome of that. Once you step inside is huge compared to what you’d assume from the outside. Filled with colorful art along the walls and tons of seating. We grabbed a round table so that we could easily share between the six of us.

My stomach immediately started grumbling from the smell of the food. And then I saw a server bring a gigantic bowl of pho to the table next to us and I knew that was one of the first things on my list.

Each of us started picking out things we wanted to try. Plus familiar dishes we knew we’d love. Our server was awesome and gave recommendations of some of her favorite dishes as well! We ended up ordering a feast (as any great friend group would) and I’ve got plenty of pictures to share with you!

First up are these fried egg rolls. I’m usually not an egg rolls fan, but these were small crispy and delicious. Not sure what the name of the sauce was but it had thin shredded carrots and was kind of like a brothy sweet and sour. Super good and I would definitely eat these again!

Next up, are the beef spring rolls. Spring rolls are my usual go-to but I’d never had it with beef before. Spring rolls are prepared with a dampened rice paper and really whatever fillings you’d like. These had rice noodles, salad or bok choy, cilantro, sprouts and of course, the beef. The dipping sauce was the same as the egg rolls!

Though the beef spring rolls were good, shrimp is my favorite! Prepared the same way but with shrimp instead. But this sauce is where it’s at. Peanut sauce (which I think is traditionally served with Satay) is one of my favorite dipping sauces ever. I’m a huge fan of peanut butter, so it’s no shocker that I love it. But anything nutty in Asian dishes just takes the flavor level up a notch.

If you thought we stopped at just rolls for apps I’ve got two more items coming at you! Next up is the tofu. If you’ve kept up with my posts, you’ll know that I actually quite like tofu. I cook with it at home at least once a week and love to play with the texture and flavor. Only a few of us liked this app at the table, mainly because of the texture. For me, it was a little on the squishy side. Not sure if they used soft or medium tofu, or if it wasn’t pressed to drain the moisture. However, I still liked it! They were crispy on the outside and served with a soy sauce/green onion mixture. We learned after order them that you can ask to have them extra crispy and I’m definitely giving them a try again with the special instructions!

Our last app was hands down my favorite. I love ordering wings at Asian restaurants. They just know how to cook a freaking wing! They’re always crispy yet fall off the bone and the flavor is always delicious. The secret ingredient in most Asian wings (and dishes) and also my secret ingredient at home, is fish sauce. If you smell it straight from the bottle it’s a bit unpleasant, but I promise you, it will enhance any dish and boost it with a punch of flavor.

My girlfriends favorite dish to order at Vietnamese or Thai restaurants are the beef short ribs. If you’ve never had these, I highly recommend them. They’re thinly sliced and I’m assuming, marinated for hours if not overnight. Then, they’re cooked low and slow to give them a moist and tender texture. The Asian spices really shine in the dish. I’m not a huge red meat fan, but I could absolutely devour a plate of these myself. 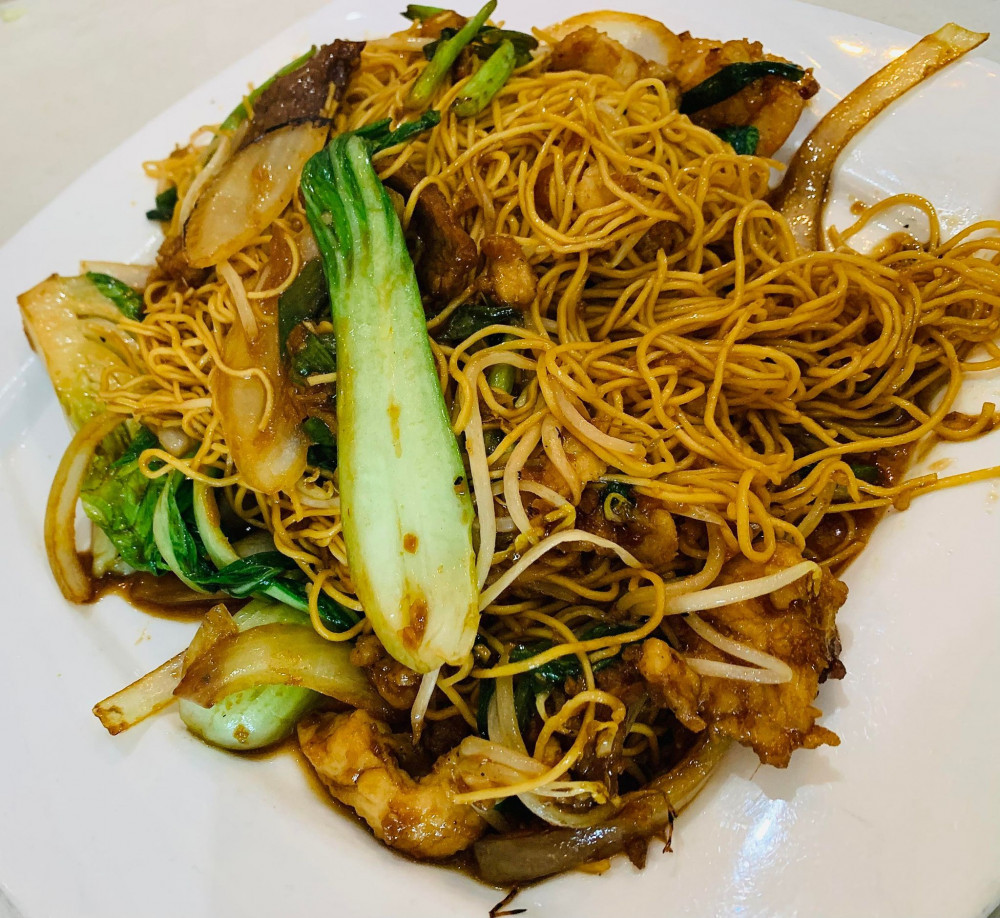 Next is the combination Chow Mein. This was recommended by our server as one of her favorite dishes! It’s prepared with beef, chicken, seafood and veggies including the delicious baby bok choy displayed on top. My favorite part of this dish though, were the chow mein noodles. They’re thin, just the right amount of chewy and perfectly coated in sauce.

What I ordered, and was most looking forward to, was their pho. It’s a brothy soup filled with noodles, herbs, meats and yummy spices and is accompanied by lime wedges, sprouts and fresh basil on the side. This picture doesn’t even do it justice for how big this bowl was. It definitely exceeded my expectations! All pho I’ve had, has had beef meat balls and thin rare beef that typically cooks in the hot broth. I ordered the combination pho which also had tripe. Not knowing what this was, but as someone who is also an adventurous eater, I was like sure sounds great!

Afterwards my friends informed me that it was the edible lining from stomachs of animals like cattle, pigs and sheep. If that made your stomach turn I apologize. I decided to give a small piece a try. Plus it was just super chewy. I’ll admit, I did have to spit it out and then picked out the rest of the pieces as I found them. There’s not many pieces in the whole bowl if you do decide to order it! There’s definitely more rare beef which was great.

They also give you a container of chili oil for the table which goes great in pho. But beware, if you’re used to store bought chili oil this your warning. The authentic stuff is spicy as heck!

How to Find Mike’s Cafe

First off, you should follow them on social media to support them.

Have you ever tried Mike’s? Or maybe have a favorite place for pho in your hometown? Let me know in the comments! And if you’re ever in Little Rock, AR don’t forget to look them up and check them out!

Remember to be brave in trying new things and always cook with a dash of love!